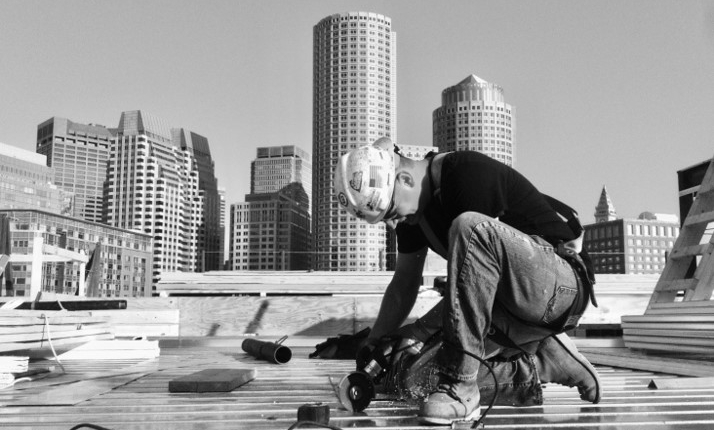 – Spotlight on The Faherty Company

For the two years that The Faherty Company, a plumbing shop based in Weymouth, has been in business, about a year of it has been during the pandemic. It’s been a difficult time for any company, let alone a new one, to operate. But the South Shore contractor, which is affiliated with Local 12, has been making the best of it. The two-person shop may be small now, but owner Michael Faherty has plans to expand.

Faherty has been a Local 12 member for 16 years and worked for GBPCA contractor Commonwealth Plumbing. He followed in the footsteps of his father, Edward, who has been a Local 12 member for more than 40 years. Faherty says that he worked alongside his dad during his apprenticeship and at other times. Growing up in Quincy, he remembers assisting his father with small projects around the house and says that it helped him learn construction basics and how to work with his hands.

During high school, Faherty worked for P.V. Sullivan, a plumbing supply house in Quincy. He says that the experience allowed him to get the feel of the industry, which he enjoyed and found interesting. When Faherty decided to become a plumber, he sought out Local 12. “My father always told me about the importance of the union,” he explains. “There was never any question that I would want to join.”

While at Commonwealth Plumbing, Faherty rose through the ranks and took on a leadership role running work on large commercial projects. After a number of years, he got the itch to open his own shop. “I felt like I wanted to do more,” Faherty says. “I wanted to see what I could do on my own.”

“It’s great to have someone with deep roots in Local 12,” says Tim Fandel, the local’s business manager, about Faherty. “We are here to support him.”

“There are plenty of smaller projects out there,” notes Faherty. “Everyone needs plumbing work.”

“We think it’s great that Michael decided to put his own shingle out,” Fandel adds. “We encourage that.” Restaurant fitout by Faherty Company Plumbing.[/caption]When he opened his shop, Faherty says that he started working on small, residential jobs and focused mostly on service. Later, he moved to high-end homes and then pursued commercial service and small, commercial work. Projects have included updating and repairing systems for Jiffy Lube franchises in Whitman and Dedham as well as service work for Lowe’s in Weymouth.

The pandemic has caused developers to temporarily put many commercial projects on hold, but Faherty has been actively bidding on a number of jobs and waiting for them to be released. It has come full circle for Faherty and his father, with the two working together once again. His dad retired a couple of years ago and now helps him behind the scenes with bids and other matters. Faherty says that it’s great to have his father as a sounding board and to offer advice.

Among the projects on which he is bidding are tenant fit-outs in Boston. Faherty is hopeful that he can take on larger jobs once the threat of the pandemic has passed. “One of the great things about working with Local 12,” he says, “is that I’ll be able to staff up when I do get the work.

This senator puts people above party