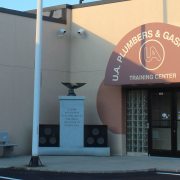 As with nearly everything, the pandemic wreaked havoc with Local 12’s training center. But, after coping with major interruptions and modifications the past two academic years, apprentice classes and other programs at the center have returned, more or less, to regular operations.

The only major concession to the ongoing threat of COVID-19 is that students, instructors, and visitors must wear facemasks in the facility while they are in classrooms. Night classes for journeyman training, which had been temporarily cancelled, have resumed.

“We are trying to get back to normal,” says Rick Carter, the training center’s director. “But I think we are all still in COVID shock. Some people are having a hard time rebooting and returning to normalcy.”

When the pandemic forced schools to close in March 2020, the training center switched to remote learning. For classes that emphasize hands-on instruction and participation, the model proved to be difficult. Carter says it was not conducive to the kind of high-quality training for which the center is known.

In fall 2020, in-person classes returned. To maximize social distancing, however, the class sizes were reduced to about ten apprentices. That meant the center had to expand its schedule and present more classes to accommodate everyone. Many hand sanitizer stations were installed, the HVAC system was upgraded to improve ventilation, and other modifications were made. It was not ideal, but it was significantly better than conducting virtual classes.

This academic year, the center is back to pre-COVID-sized classes and a regular schedule. Carter says that it’s good to put most of the pandemic-era modifications in the rearview mirror. “Hopefully we never have to go back to that.” 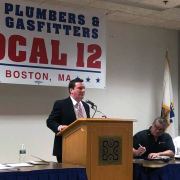 A Republican senator who supports unions? Sounds crazy, no? But Massachusetts State Senator Patrick O’Connor threads that needle with aplomb.

The defining events that helped shape the pragmatic, authentic politician and his convention-defying worldview include growing up in a union household. His mother, Terry, is a NICU nurse who belongs to the Massachusetts Nursing Association, and his father, Mike, is a Local 12 plumber.

“My parents instilled the value of hard work at a very early age. They also made sure I looked out for others,” O’Connor says. He believes that their union affiliations set an example and reinforced the lessons they taught him. “One thing unions bring to the table is a fundamental understanding that it is our responsibility to take care of our own. That’s something I take with me every day to Beacon Hill.”

O’Connor remembers that his father would get up very early to go to work and would sometimes be on call, working late into the night. Nonetheless, he says, it was evident that his dad loved being a plumber. O’Connor would occasionally help his father with projects around the house and enjoyed accompanying him to work. He considered becoming a plumber himself or pursuing another trade. But public service beckoned and was more of a calling.

Politics, O’Connor says, has always been a major topic in his family. His late grandmother, Virginia O’Connor, worked as a secretary for legendary U.S. Speaker of the House Thomas P. “Tip” O’Neill when he was a Massachusetts state representative. That gave her a front-row seat to the government’s inner workings and plenty of fodder for family discussions. His grandmother’s keen interest in politics got O’Connor intrigued in the topic.

At age 21, he entered the fray and was elected to Weymouth’s town council. He rose to serve as its president. In 2016, O’Connor won the Plymouth and Norfolk State Senate seat and was reelected this past November.

As a Republican, some of his positions hew to party lines. For example, O’Connor often votes to rein in what he considers excessive spending and taxation. Then again, he supports renewable energy and legislation benefiting low-income and marginalized families, issues that are typically associated more with Democrats.

“My policy positions are all over the map,” admits O’Connor, who describes himself as a moderate, centrist Republican with a very independent voice. His core belief, he says, is to make government work better for people. “We need people from both parties who are willing to come together, work hard, and provide solutions.”

Perhaps nowhere does the Republican diverge more from his colleagues than on labor issues. He has seen first-hand the difference that unions have made for his parents. “I’ve experienced it, and I believe in it. That helped me form an opinion early on that regardless of all other policy positions, I was always going to be staunchly pro-union,” O’Connor adds.

His stance sometimes elicits ribbing from the state’s Republican caucus. But, he believes, his advocacy for labor has also opened eyes among many legislators.

On the other hand, O’Connor’s labor voting record has earned praise from the Massachusetts AFL-CIO. He was the only Republican to be endorsed in the last election by the state organization. In response to the endorsement, O’Connor said he “was proud–floored actually. It’s an affirmation of the work we’ve been doing. That put the exclamation point on our campaign.”

He says that Massachusetts has one of the strongest–if not the strongest–labor movements and construction markets in the country. O’Connor isn’t about to rest on any laurels, however. “There is still a lot more work to do to make labor even stronger,” he says.

Given the influence of Tip O’Neill, an outspoken liberal Democrat, how is it that O’Connor chose to become a Republican? It was the 2000 presidential campaign of self-described maverick, Senator John McCain, which attracted him and sent him down the GOP path. O’Connor believes that many of the ideals that he admired in McCain remain intact in the state’s Republican party. He contends, however, that the national GOP has strayed from those beliefs.

Echoing a sentiment that is the hallmark of President Biden, O’Connor says that that there is often too much divisiveness among Republicans and Democrats and calls for more unity. “Generally speaking, we are all Massachusetts residents, all Americans, all human beings. We need to treat each other better.”