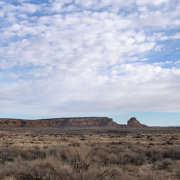 “People need water and sewerage,” says Rick Carter, Local 12’s training director. “Most people take running water and indoor plumbing for granted.” That is, until something fails. Then they realize the critical role that plumbers play. Some folks, however, don’t have ready access to life’s most basic needs. For example, one in three people live without a sink or a toilet–that’s 67 times more likely than other Americans–on the Navajo Nation, a vast swath of land that spans Arizona, Utah, and New Mexico. Plumbers are rising to the challenge.

The United Association (Local 12’s parent organization) organized the Wash Station Challenge over the summer. The goal was to construct 20 outdoor wash stations targeted for remote areas in Navajo Nation. As part of the UA effort, volunteers at Local 12’s training center built two of the units.

The UA first got involved with the Navajo Nation two years ago when it partnered with the International Water, Sanitation, and Hygiene Foundation (IWSH) and the DigDeep organization’s Navajo Water Project to build a water tank, septic system, bathrooms, and more in New Mexico.

“It was like that show, ‘Restaurant Impossible,’ ” says Tom Bigley, director of plumbing services for the UA. “I called it ‘bathroom impossible.’ But we got it done. It was very rewarding.” Bigley serves on the board of the International Association of Plumbing and Mechanical Officials (IAPMO), and IWSH is the association’s public charity.

Last year, Plumbers Local 400 in Wisconsin helped develop and build a prototype wash station. Its success led to this year’s Wash Station Challenge. Amid the pandemic, the Navajo Nation has experienced some of the highest infection rates in the U.S. With running water scarce on the reservation, people have limited ability to wash their hands and help prevent the virus from spreading. The wash stations are intended to support and enable handwashing in local communities and remote households to help halt COVID’s spread and promote public health and hygiene awareness.

“When Harry Brett and Tim Fandel learned what we did, they offered to help with future projects,” Bigley says.

“We are honored to be asked to help and happy to do so,” says Fandel, Local 12’s business manager. He notes that the joint labor-management group that the union has with its affiliated contractors provided the funds for the project’s materials. “It was very generous of them,” Fandel says.

The stations, which are about five-and-a-half feet wide and deep, contain a 210-gallon water tank and a sink assembly with a drop-down steel mesh countertop on one of its sides. The tank is inside an insulated cabinet and includes a heating element to prevent the water from freezing during the winter. The mobile units sit on steel frames with large wheels.

“They look like chicken coops that are bound for the moon or like the Mars rovers,” says Bigley with a laugh. A wash station in use at Navajo Nation.

The first step in assembling the stations was to build their frames, which involved welding aluminum stainless steel and carbon stainless steel. The training center’s welding instructor, Bobby Niles, and two apprentices in Local 12’s welding program came in Saturdays and some nights to work on the frame. Other instructors and apprentices handled the units’ shells, which included wooden doors. The stations were built in the training center’s new annex shop.

Some of the stations use electricity. The off-grid models that Local 12 built include solar panels. Training center instructor Johnny Tierney, who is a licensed electrician, wired them so they would be self-powered.

“There was a lot of cutting and fabrication to build the stations,” Carter says adding that they took from May to September to complete. “We have great instructors and apprentices who wanted to be involved and donated their time.”

The training director says that several partners got involved with the project as well. For example, Ferguson Plumbing donated the sinks and the water tanks. Local 12 neighbor Gilbert & Becker, which is a roofing contractor, put metal skins on the exterior of the stations to make them weathertight. When the units were completed, the company also supplied a forklift to load them–all 1,100 lbs. of them–onto moving trucks for shipping.

Bound for the Navajo Nation in Arizona, Carter says that the location is “literally in the middle of nowhere.” Because there is no street address, the shipper had to use GPS coordinates. Once they arrived on site, DigDeep distributed and installed the washing stations. “Hopefully they will get years of use out of them,” Carter says.

“I think everyone’s aware that Native Americans have been treated unfairly,” says Bigley. “Our people like to work with their hands, and this is a way that we can help. It really resonates.” He adds that the UA will continue working with Navajo Nation, and that the next challenge will likely be bathroom units.

Whatever the project, Carter and Fandel say that Local 12 stands ready to help.