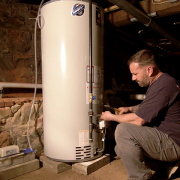 With a war raging, mass shootings, and other unrest, the world can often seem like an unsettling and unfriendly place. But amid the chaos and confusion, it’s heartening to find acts of kindness and compassion that demonstrate the basic decency to which most folks aspire. There are inspiring stories, even in dark circumstances, that can help restore one’s faith in people. This is one of those stories.

When the Taliban took over Kabul in 2021, conflict and the threat of violence displaced even more Afghans from their long-suffering, war-torn country. Millions of them sought refuge in other places. A few Afghan families ended up in Newburyport. The community opened its doors and its hearts to welcome them. Local 12 and the Greater Boston Plumbing Contractors Association (GBPCA) heeded the call and supported the efforts.

It was Hugh Kelleher, a longtime Newburyport resident, retired Local 12 member, and retired executive director of the GBPCA, who made the connection. He read about the refugees’ plight in the local newspaper and learned that the city’s religious leaders were seeking help and donations to provide shelter for the Afghans. When Kelleher saw that the temporary housing lacked some basic plumbing needs, that piqued his interest.

“Over the years, there have been many projects that Local 12 and the contractors have helped out on,” he says. “I thought this would be a very worthy project.”

Kelleher contacted John Marani, president of the GBPCA, and Tim Fandel, Local 12 business manager, seeking their assistance. Both were eager to help, and the organizations’ trustees decided to get involved. The two groups joined forces and funded a grant to underwrite the cost of labor and materials needed to perform the plumbing work at the living space provided by the Unitarian church, one of the city’s participating houses of worship.

As Rebecca Bryan, minister of the First Religious Society Unitarian Universalist Church, explains, its congregation is hosting a large Afghan family in Parish Hall, a building adjacent to the church. Typically used for Sunday school classes and social functions, the converted living space did not have a shower, nor a washer or dryer. Bryan, who serves as Newburyport’s chair of Interfaith Coalition of Clergy, reached out to Kelleher, who had helped do plumbing work at the temporary housing provided by the city’s Episcopalian church for another refugee family.

Kelleher brought in Kevin O’Connell, owner of O’Connell Plumbing and Heating in Salem, to look at the project. Together, they determined that a shower could be added to the existing bathroom; a closet could be converted into a second bathroom, with a toilet, shower, and sink; and a washer and dryer could be installed in the hall. They also realized that a larger hot water heater would be needed.

“Honest to God, they didn’t just help out,” the minister says about the plumbers. “What they did was remarkable. They just made it happen.”

When Norman Fine at supply house F.W. Webb heard about the project, he offered a hot water heater, gas piping, and all other plumbing materials at a greatly reduced cost. Thanks to the grant from the union and the GBPCA, the Local 12 members working for the Salem shop got paid for their work, but O’Connell did not add any profit to the job.

According to the contractor, an architect from the church volunteered to draw up plans for the project. That was indicative of the broad-based support that the community provided.

“We had to move some heavy supplies,” O’Connell says. “The next thing I knew, the Newburyport High School basketball team showed up to help.”

Over 100 people have been involved with the refugee family at the Unitarian church alone, Bryan estimates, helping them learn English, book medical appointments, and navigate services, among other things. Hairdressers, bike shop owners, and others in the city have stepped forward to do their part.

O’Connell can empathize with the refugees and understands the outpouring of support. “It’s terrible to be uprooted from your home, having to live someplace completely different and foreign,” he says. “It had to be extremely disorienting and frightening for them.”

Mohammed, one of the members of the family, had been a security guard at the U.S. embassy in Kabul. When the American security forces began withdrawing from Afghanistan, the Taliban moved in and took control of the city. They began going house to house to interrogate the residents and paid a visit to Mohammed.

“They knew that he had helped the U.S.,” Kelleher says. “The Taliban were not going to be fans of this guy.”

He and his family ran out the back door, escaped to the airport, and somehow got on a plane. Their journey took them to Qatar and then Germany, before landing in the U.S. and staying briefly at military facilities in Virginia and New Jersey. Eventually, the refugees made their way to Newburyport.

The family is enjoying the newly outfitted home in the church’s hall and is appreciative of the help they’ve received from the plumbers and others in the community. Likewise, Bryan says that she and the congregation are grateful for the plumbers’ support.

The living space is full of life, laughter, and good food, according to the minister. The family have made Newburyport their home. When one of the daughters graduated eighth grade, she was given an award for perseverance. “I could cry,” says Bryan, when sharing the accomplishment. “The whole city has embraced them, and they’ve embraced the city.”

The goal, eventually, is to help the family find permanent housing in the area. The organizations that have been helping all the Afghan families in Newburyport hope to create three properties that would be designated for refugees in perpetuity.