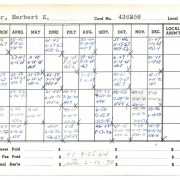 “It’s a great life being a plumber,” says Richard “Tim” Tyler. “It’s great working as part of the union.”

It’s so great, in fact, being a Local 12 plumber has become something of a family tradition for the Tyler clan. Tim’s grandfather, father, and brother all pursued careers as union plumbers. Soon, his son will follow in their footsteps.

It’s a recurring theme at Local 12. There are many instances of family members taking cues from their parents or other relatives and entering the trade. But it’s notable when four successive generations of a family lay claim to a union card.

“The Tylers show that Local 12 really resonates with families and plays an important role in their lives,” says Tim Fandel, business manager. “We continue to be viable and relevant through the years.”

The saga of the Tylers all started with Herbert Tyler. A “small-time plumber in Bangor, Maine,” according to Tim, Herbert packed up his family of seven and moved them to the Boston area in 1945. A friend of his told him that Local 12 was looking for members, and, sensing opportunity, Herbert didn’t hesitate.

He did, indeed, find opportunity as a union plumber. Working for Ferris and Mahoney (a mechanical contractor that is no longer in business), Herbert ran large projects. He overcame adversity and was well respected by his employers and those who worked for him, according to Tim.

“He had a learning disability and was unable to read blueprints,” he explains about his grandfather. Nevertheless, Herbert understood large, complicated systems and was able to successfully lead his crews. “All his jobs made money,” Tim says with a laugh.

Later in his career, Herbert became a plumbing inspector in Bedford, Massachusetts, his hometown. Even as an older gentleman, Tim remembers that his grandfather was always on the move and was an especially fast walker. “You had to run to keep up with him,” he says.

Tim’s father, Richard H. Tyler, served in the Marine Corps. When he finished his military duty, he too joined Local 12 and entered its apprenticeship program. Among the contractors he worked for were Ferris and Mahoney and Baystate York. One of the signature projects Richard worked on was the Prudential Center.

“He ran work at a relatively young age,” Tim says. “He was very good at it like his father. He was a small guy, but everybody was afraid of him. He just had that look about him.”

They got the work done, adds Tim. And despite his father’s fearsome look, he says, everybody liked him. A hard-working man, Richard put in 60 hours a week and then had side jobs to supplement his income.

As children, Tim and his brother Scott remember helping their dad clean up scrap copper and other tasks. They got their hands dirty and learned about the trade. The work and the life of a union plumber called out to both of them.

They joined Local 12 and often found themselves working together for contractors such as Kennedy Mechanical, Cannistraro, and, more recently, Pinnacle Construction Services. Tim also logged ten years with PCA contractor, J.C. Higgins, working on landmark projects such as the Big Dig and the Convention Center.

Scott and Tim worked together for a decade with their father when Richard opened his own shop, Tyler Plumbing. A Local 12 signatory contractor, the shop specialized in medical gas. Tyler Plumbing worked on a lot of nursing home projects as well as several VA hospitals.

The business was tough financially for his dad, Tim says. “At the time, Local 12 didn’t have programs for smaller shops like they do today. He would have benefitted from that so much. The union has come a long way.”

Richard didn’t start Tyler Plumbing until he was 50. When he closed the shop, he retired.

In addition to Tim and Scott, Richard had two daughters. Tim says that the boyfriend of one of his sisters asked Richard for his daughter’s hand in marriage. He responded that he didn’t like what the suitor did for a living.

It should probably come as no surprise that Richard convinced his other son-in-law to become a plumber also.

While plumbing was all in the family, Richard initially had other plans for Scott. Always a good student, he wanted his younger son to go to college. During his senior year in high school, Scott began working regularly with his father on side jobs.

“He put me in the lousiest bathrooms and had me gut them out. I think he was hoping to scare me away,” Scott says. “Instead, I loved it.”

Scott continues to specialize working on projects that feature medical gas. With Pinnacle, he has been running many jobs in the Longwood area, including projects at Beth Israel Deaconess, Boston Children’s Hospital, Brigham and Women’s Hospital, and the Dana–Farber Cancer Institute.

Now 61, Tim says that he is getting near the downside of his career and is looking forward to retirement. His son, Jake, however, is just beginning his plumbing career.

His story has a familiar ring to it. Starting as a young teenager, Jake says that his father brought him to side jobs on weekends. He has been tooling around boilers, water heaters, and sinks for many years. Jake enjoyed the trade so much, he went to Shawsheen Valley Technical High School in Billerica and began working at a plumbing shop in his junior year.

“I’m carrying on the family tradition,” he says proudly.

The 18-year-old graduated high school last spring and recently applied to Local 12. He hopes to apprentice with large contractors and do major commercial projects such as high rises. And so, the Tyler family’s plumbing legacy continues.

“Plumbing and Local 12 have been very good to us,” concludes Scott. 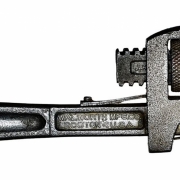 The next time you reach for a pipe wrench, you might want to consider that you owe a debt of gratitude to Daniel Stillson. He was an engineer at the Boston company, J.J. Walworth Manufacturing, and invented the Stillson wrench in 1869. Some 150 years after he helped revolutionize plumbing, modern-day versions of Stillson’s ubiquitous tool remain virtually unchanged.

A recent Boston Globe article written by Michael Fitzgerald featured the Stillson wrench. Bearing the headline, “The best local invention we’ve forgotten,” Fitzgerald traced the tool’s development. He indicated that the wrench gained such currency, people referred to it generically as a “Stillson,” much the same way that we use the term “Google” today. According to the writer, it became America’s most famous tool.

Stillson did not invent the first adjustable wrench. Credit for that goes to Solyman Merrick of Springfield, Massachusetts, who, in 1835, patented a wrench with jaws that could be moved by turning a screw. What Stillson did was add angled teeth to the jaws and make the head loose. Those two innovations enabled his wrench to more firmly grip metal pipes, which were replacing wooden pipes in the plumbing trade. The versatile tool allowed plumbers to work with a variety of pipes and fasteners, including ones that were worn. Because of its flexibility, plumbers could replace whole sets of fixed wrenches with a single Stillson.

According to Fitzgerald, “In the mid-19th century, there was no more exciting place to work in the plumbing industry than Boston.” In addition to the Stillson wrench, the Walworth company also developed the concept of steam heating systems and manufactured the Walworth radiator. The Trimont Company, based in Roxbury from 1902 to 1954, was also known for its wrenches as well as other pipefitting tools.

Following the conventions of the day, when Stillson brought the prototype of his wrench to his bosses at Walworth for consideration, they insisted that the inventor apply for the patent and own the tool. Through a licensing arrangement with the Boston company to manufacture and sell the wrench, Stillson earned fees estimated at $100,000 throughout the course of his life. That’s equivalent to $3 million in 2020.

Walworth relocated to Texas in the 1950s and then to Mexico in the 1970s. After the patent expired, other companies issued their own versions of the Stillson.

Interestingly, Walworth’s factory was located in Cambridge in a building that had previously housed a horse-drawn carriage manufacturer. Later, Edwin Land bought the building and used it to develop his Polaroid instant camera. Today, MIT owns the space and runs a company known as the Engine there. It welcomes tech startups in the energy, biotech, and manufacturing fields.

Who knows? One of them may develop something as game changing as the Stillson wrench.