There are two pieces of legislation winding their ways through the State House that are of interest to the industry. One would establish licensing standards for medical gas piping systems, while the other would do the same for drain cleaners. Both of the bills were introduced early in 2019, both have been referred to the Joint Committee on Consumer Protection and Professional Licensure, and both have had public hearings conducted.

While licensed plumbers have traditionally handled medical gas installations in the state, there are no state regulations that govern the practice. By establishing standards and bringing medical gas piping systems under the control of the Massachusetts Board of Examiners of Plumbers and Gasfitters, the pending bill would codify the work and help ensure patient safety. There have been some high profile cases in which medical gas cross connections have caused severe injuries and death.

Local 12 apprentices learn the complicated processes of brazing and medical gas systems at the union’s training center. “It’s important for medical gas to be part of the state’s plumbing code so it can be properly regulated and inspected,” says Rick Carter, the training center’s director.

Likewise, virtually anybody in the state could offer services as a drain cleaning company. With no state agency providing oversight, this can lead to shoddy work or worse. In 2016, two rain cleaning company employees were killed when a pipe burst in a trench at a construction site.

According to Harry Brett, Local 12’s business manager, drain cleaners sometimes perform unlicensed plumbing work while making service calls. The new legislation would limit drain cleaners to working with pipes connected to fixtures such as sinks and toilets, and prohibit them from installing or cutting any pipes. It would also require them to obtain board certification and complete at least 100 hours of drain cleaning work under a qualified supervisor such as a licensed plumber.

Brett says that the bills are common sense issues. “When they put the mask on me before I go under for surgery, I would sure want to know that a trained, certified plumber did the work.”

He’s carrying on the family business

GBPCA produces a podcast for the plumbing industry 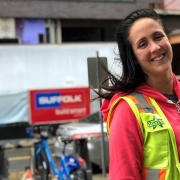 Apprentice draws on her past experience

Day care that works for parents in the trades

The business of being a business agent

Expanding the Garden into Boston’s new Hub
Scroll to top